Escaping the headlines in the Peloponnese, with Becky Kruger

It’s so good to see nemo travellers return with a massive smile on their face. This week, defying the headlines and making the most of summer, Becky and Nat returned from an epic trip to Southern Greece. They grabbed a hire car in Athens, cruised through the Peloponnese peninsula, and proved that a big adventure is still there to be experienced. Without further ado, over to Becky to tell you all about their trip and how Kyrimai was the perfect pick for them…

Firstly, it felt SO good to get out of this country, the world still exists! And it’s ok to travel. It’s seriously refreshing – and in my opinion, everyone that can needs to do it. Plus, Greece is awesome to explore and the perfect place to relax whilst filling yourself with unbelievable Greek tastes. Perfect.

We set off for Kyrimai after a hilarious night (at Arachovikita Kalivia, highly recommended) drinking with Maria, our fantastic 70-year-old Greek host in Sparta, with a stop at Skoutari Beach for a swim and sunbathe. This beach was so deserted, only a few Greeks, salty warm turquoise sea, sunshine and cool rocky terrain and cool windy drive through olive trees to get to.

Driving in the Peloponnese is far more beautiful than I had thought it to be, not really sure what I was expecting this part of the mainland to be like to be honest. It’s like being in the Atlas Mountains, is extremely Sparse and spoilt with Cyprus trees, cacti 🌵 olive and orange groves. What more could you want! Plus, there’s nobody anywhere, each village is deserted – is it always like this or just because it’s the end of the season I wonder? If only we had a soft top so we could take in more of the orange and olive smells that keep bursting in through our windows.

Much of the Mani Penninsula’s landscape is barren, but there are towns which dot the coastline which is stunning to admire, so ancient. In particular, Mani’s emblematic tower houses full of 17th century Greek history. We drove to the southernmost tip of the Peninsula one day,  Cape Tainaron, one of Laconia’s most notorious legends. We did a small 2km rambling walk which leads you to a cave near the cape’s edge and lighthouse, which, ancient Greeks believed, is the entrance to Hades—the underworld.. There’s a lot more to explore around here, UNESCO sites plus beautiful hikes which we would like to do when and if we come back one day! We love having the car as it makes the trip so much more of an adventure, plus you see more of the stunning Greek landscapes, local villages and coastline; rural Greece.

We drove about 4 hours over the mountains to Ermioni, a sweet little/pretty fishing town where we left the car. Leaving the car was so relaxing, we didn’t have to pay for parking and parked right by the ferry port! Hopped on the ferry and 25 mins we landed on Hydra island. Great way to do it. On the way back we managed to have a dip just up from the main town which was lush – a few other locals were doing the same thing. 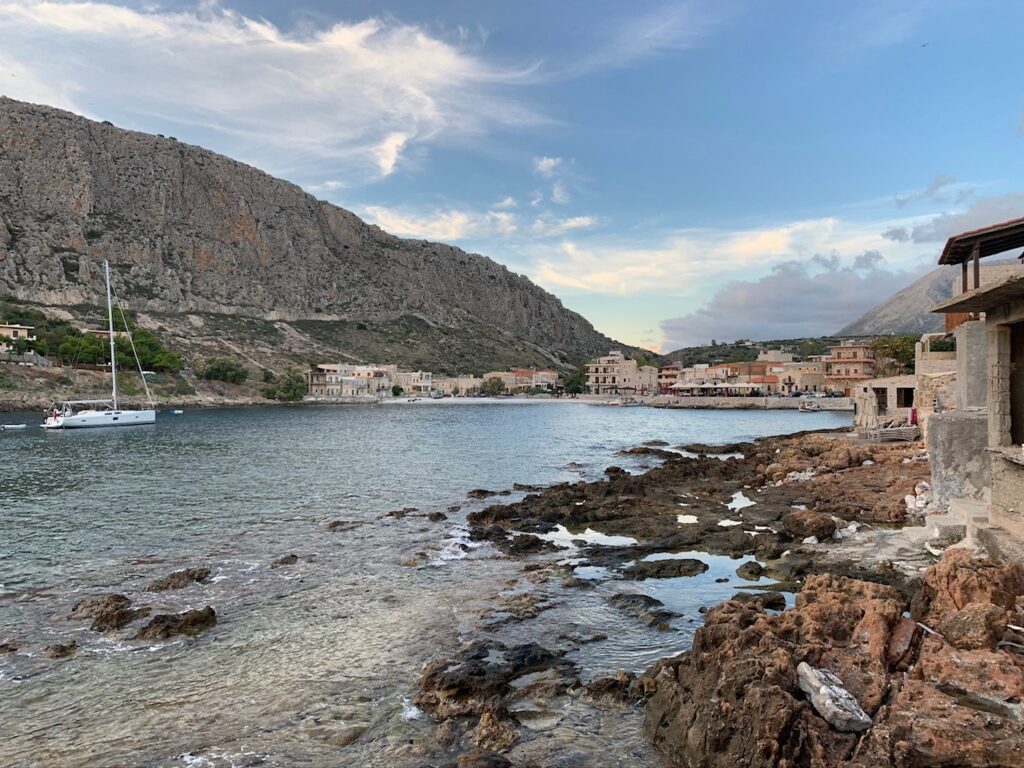 We arrived at Kyrimai to a glass of fresh homemade lemonade, tick. The location of the hotel is set amongst a mountain valley, in the sweetest Greek fishing village (if you can really even call it a village!), just off the southernmost tip of Mani. The hotel faces the crystal blue sea and rocky landscape making it a serious destination to get to and not move from. The hotel has been restored from the 19th Century and is bursting with history – it is full of archives and artifacts and stories from the people who have stayed and worked there through the decades. This not only made it homely, it also made it far more interesting that a typical 5-star hotel.

The hotel is decorated as a luxurious mansion house, combining tradition with modern comforts – I fell in love with the beautiful Greek whites,  Grecian pots and wooden/stone furnishings. Actually, being situated right on the water’s edge with the waves hitting up against the hotel grounds is what did it for us. Every morning Natty and I would get up and jump off the hotel jetty and swim around the lovely bay before devouring an 8-course breakfast, heaven! The owner of the hotel hangs out there, normally on one of the balconies having coffee with his wife doing various bits and bobs. You wouldn’t know he was the owner, he’s a typical Greek, so chilled out and always hanging out! Love this.

So, I would totally just come back just for the food! There is the one restaurant, where you can either sit either on the deck like you’re dining on a boat, or inside the beautiful dining room.  I have to highlight the breakfast, a total Greek feast to the utmost quality – traditional tastes with so many delicious twists. There’s no buffet (due to Covid) which at first, we were like, “whaaat no buffet”, then after our first experience of being served an 8-course breakfast to our table, we were like “yeah this is epic, keep it coming”. Not having to choose and having it placed in front of you if actually a real treat, especially when it tastes so damn good! Every morning we were offered homemade breads and marmalade’s/ honey (the owners mum makes the marmalade – lemon one and bergamot (which is a Greek tangerine and honestly the best marmalade i have and will ever taste!), Greek pie, fresh local cheeses, olives, Greek salad, eggs anyway, fresh fruit Greek yogurt and dried fruits, 2 sweet dishes which changed every day (always unreal), it’s safe to say we never needed lunch! 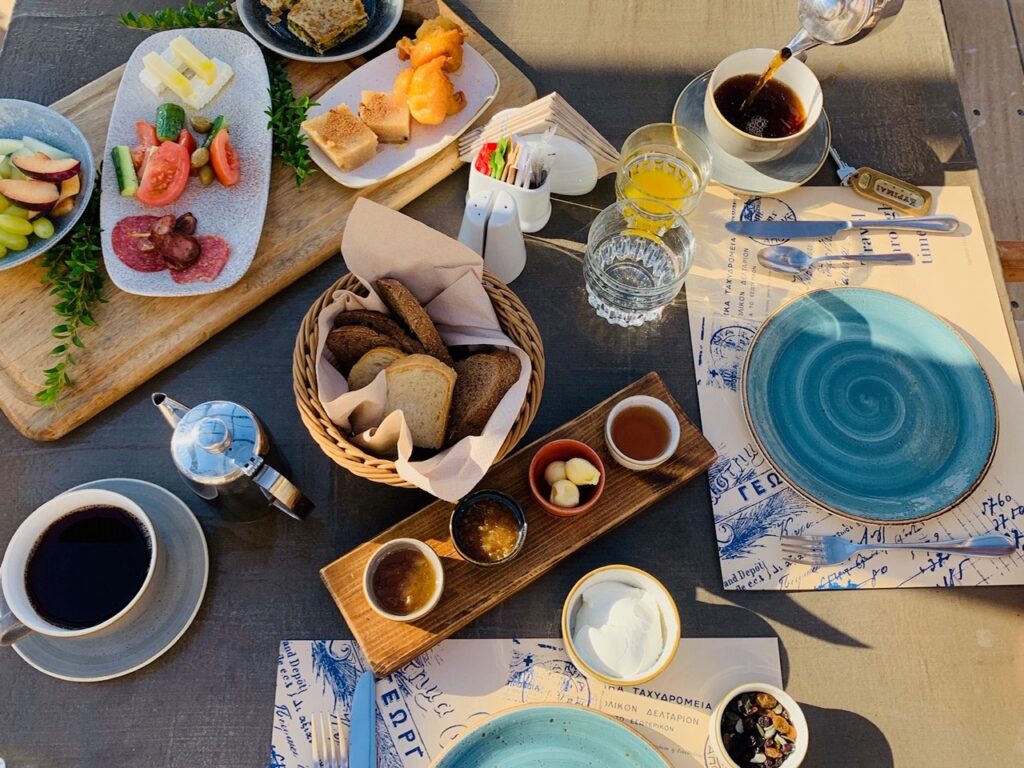 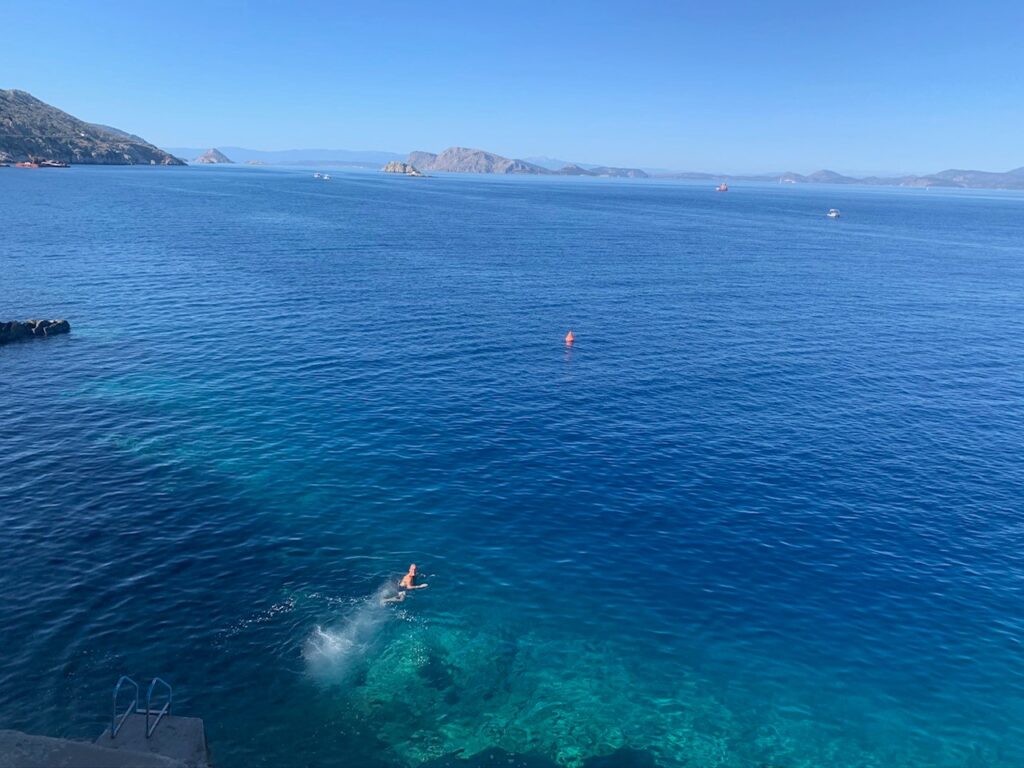 We ate supper at the hotel twice and then once in a taverna in the little village. The 2 meals at the hotel were insane, our favourite dishes were the goat & local pasta, sea bass and bread and grilled octopus. Cocktails, wine and desserts all too were very good!! Take me back! There’s an area alongside the hotel for sundowners and where they also served lunch (which we never needed after our breakfast marathon; however, the menu was extremely tempting!). The Taverna that we ate at on our middle night, Mani Mani, looked as local as you get in Greece but tasted as good as you get! Highly recommend going here and having the shrimp saganaki, grilled calamari, spicy feta dip and marinated anchovies! Detox starts when I get home. I hope to come back 🙂 We made friends with the waiter, who like everyone else is only there for the season then heads back to their respective homes (Athens etc).

The hotel has a lovely pool overlooking the sea and a deck area for sun-lounging. We swam every morning before breakfast around the little bay, admiring the beautiful hotel, rocky landscapes whilst seriously switching off and enjoying Greek luxury. Staff are very hospitable, lovely products and amenities in our room, seriously comfy bed, tick tick tick.

Hydra – 100% I would recommend this island, there are no vehicles, just lots of delicious tavernas, swimming spots, donkeys, sunset spots and Greek lazy life! What more could you want when you go to Greece?

Want to book Kyrimai? Hit the buttom below to get in touch. 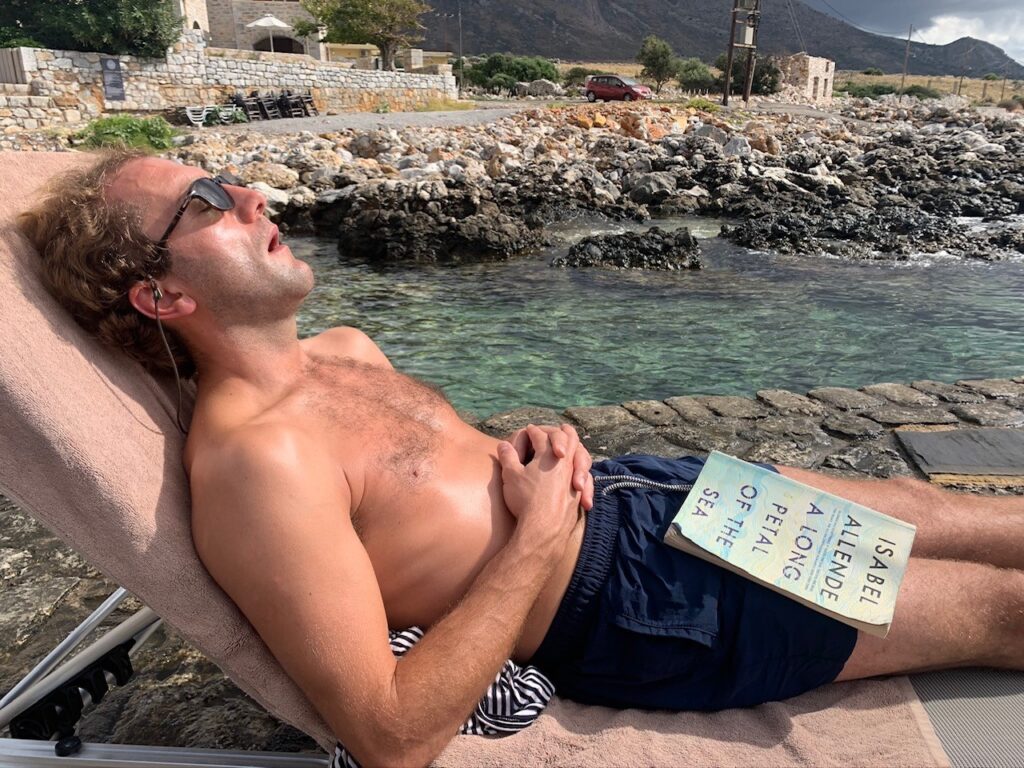 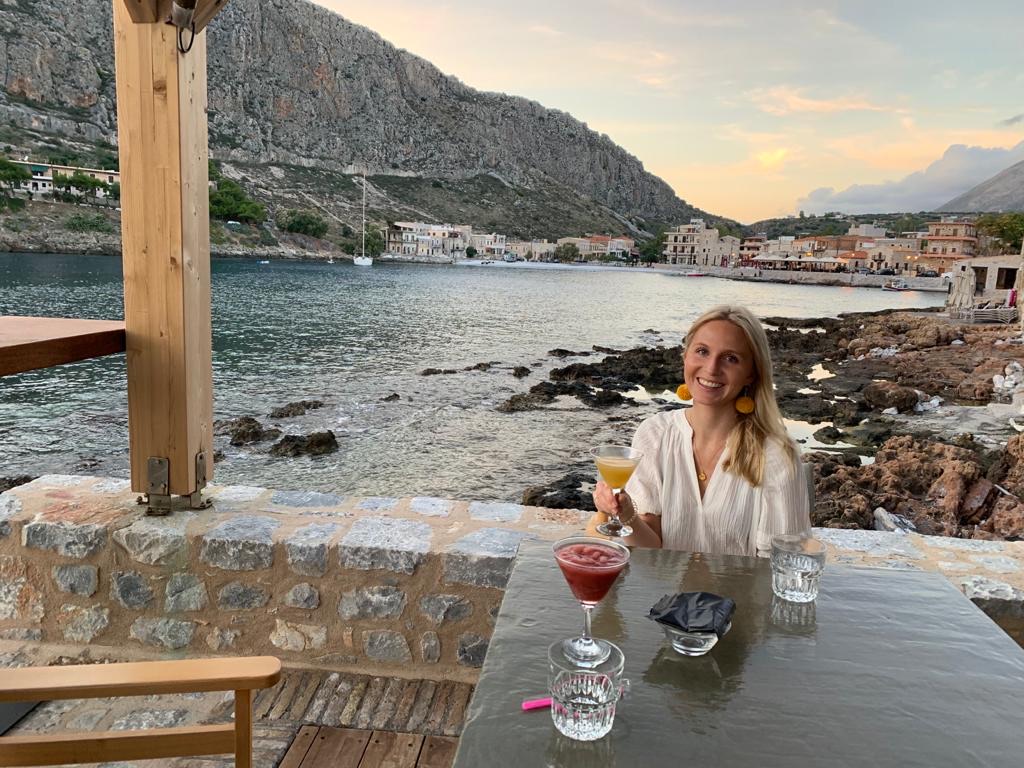 Next up
Charities •  5 minutes read

We declare a climate emergency.

Along with our friends in the travel industry, we’re declaring a climate emergency. Here’s why and what we’re going to do about it.

In this blog, Tom writes about our big learnings from the pandemic so far and how it directly led to the creation of our new website… welcome to our world.